What might happen if a 15% business tax rate becomes law? 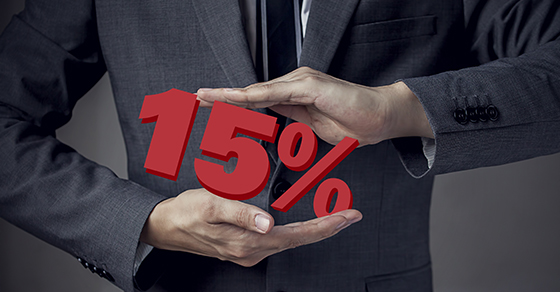 President Trump has proposed a 15% federal income tax rate on business income — whether it’s earned by a traditional C corporation or by a pass-through entity such as an S corporation, limited liability company (LLC), partnership or sole proprietorship. If the 15% rate becomes law, what new tax planning opportunities might be opened up? And what limitations might Congress impose on that ultra-low 15% rate to prevent too much tax revenue leakage?

Under the current federal income tax rules, the maximum effective tax rate on a C corporation’s income is 35%. The maximum marginal rate on income passed through to an individual taxpayer by a pass-through entity is 39.6%. So C corporations currently have a tax-rate advantage if you ignore the issue of double taxation.

Double taxation arises when C corporation income is taxed once at the corporate level and again at the shareholder level after the income is paid out as dividends. (The current tax rates on qualified dividends are 0%, 15% and 20%.) However, C corporation status remains a viable option for many businesses, despite the double taxation issue, for reasons including the following:

If a 15% corporate federal income tax rate were enacted, C corporations would likely become more attractive. The lower rate could free up cash for C corporations to hire more workers and pay for capital costs, potentially leading to faster growth. Publicly traded corporations would also reap these benefits and could pay bigger dividends.

Advocates of the 15% rate say the federal government could actually collect more tax revenue than it does now because the low rate would stimulate business growth and make companies less inclined to set up operations abroad. In addition, more taxes could be collected on higher dividends paid to investors and on wages paid to additional employees.

Under the current federal income tax rules, business income passed through to individual taxpayers by S corporations, LLCs, partnerships and sole proprietorships is taxed at ordinary income rates, which can range from 0% to 39.6%. While President Trump has proposed a lower maximum individual rate (35%), enacting a maximum 15% rate on pass-through business income without any limitations would greatly benefit higher-income business owners.

Higher-income individual taxpayers would also have a huge incentive to figure out new and different ways to route income through pass-through entities to take advantage of the low 15% rate. For example, individuals who are currently highly paid salaried employees might choose to become self-employed independent contractors who are treated as sole proprietors for tax purposes. Then, they could pay a 15% rate on their self-employment income instead of the higher rates that apply to salary income.

Similarly, individuals who are currently salaried employees might band together to form S corporations, LLCs and partnerships and offer their services through those entities. That way, they could pay a 15% rate on their pass-through income instead of the higher rates that apply to salary income.

These types of maneuvers would likely lead Congress to impose limitations on the 15% pass-through rate to prevent too much lost tax revenue. In fact, U.S. Treasury Secretary Steven Mnuchin recently said tax reform legislation would include rules to prevent people from reclassifying income in ways that aren’t intended. “What this is not going to be is a loophole to let rich people, who should be paying higher rates, pay 15%,” Mnuchin said.

The White House and Congress haven’t proposed any specific limitations on a 15% pass-through rate, but here are some that could potentially be put in place:

Imposing a reasonable compensation rule for the 15% rate could create a compliance nightmare for the IRS. Many pass-through entity owners would take an aggressive approach by paying themselves minimal salaries. The IRS would have to conduct thousands of audits to discourage tax-avoidance behavior. The IRS doesn’t currently have the resources to do that. Therefore, a reasonable compensation rule would likely be open to manipulation by pass-through entity owners and hard for the IRS to enforce.

2. Simple formula limitation. Some sort of simple formula approach could be used to limit the low 15% tax rate on pass-through entity business income. For example, 70% of pass-through income could automatically be treated as compensation that’s subject to the higher tax rates that apply to salary income and to federal payroll taxes. The remaining 30% could qualify for the lower 15% business tax rate and be exempt from federal payroll taxes.

This type of approach has no theoretical underpinning. But it has the advantage of simplicity and would be easier to enforce.

3. Return on investment limitation. Congress could try to limit the 15% rate on pass-through business income using some sort of rate-of-return approach. Pass-through income that’s treated as a return on the owner’s investment could be taxed at the lower 15% rate and be exempt from federal payroll taxes. Additional pass-through income could be taxed at the higher rates that apply to salaries and be subject to federal payroll taxes.

While this approach could be less subjective and simpler to enforce than a reasonable compensation rule, the IRS would have to issue guidelines to define what constitutes a reasonable return on investment for businesses in various circumstances. Those rules would almost certainly be controversial.

These ways to potentially prevent tax avoidance are purely speculative. And, of course, in order for a 15% rate for C corporations and pass-through entities to become reality, it must become part of tax legislation that passes Congress and is signed into law by the President. It’s also possible that the 15% rate could be negotiated to 20% or some other, higher rate.

Many new tax planning and compliance issues will arise if a lower business tax rate becomes law. Stay tuned for developments, and keep in touch with us. We can assist you in maximizing your tax-saving no matter what happens.

Join professionals from Marks Paneth and McCarter & English for the next live webinar in our series focused on key areas of guidance for organizations navigating the COVID-19 coronavirus crisis, Supply Chain: Logistics, Disruption and Recovery.