The Marks Paneth blog series entitled “Understanding the New Tax Code” is designed specifically for high-net-worth individuals in terms of helping them prepare and file their 2017 taxes and develop their 2018 tax plan.

This post deals with changes to the Alternative Minimum Tax coming out of the Tax Cuts and Jobs Act of 2017.

What is the Alternative Minimum Tax?

The Alternative Minimum Tax (AMT) is a mandatory alternative to the standard federal income tax and is triggered when taxpayers reach a certain income level.

The problem for high-net-worth individuals is that once they make more than the AMT threshold income, they need to calculate their taxes twice – once for regular income tax and once for the AMT. To make matter worse, they then need to pay the higher tax liability.

Some viewed the AMT as unfair because the exemptions were not initially indexed for inflation. As a result, the AMT started to apply to more and more people over the years, including those considered middle-class, which was never intended when the bill was signed into law in 1969 and subsequently revised in 1982.

Based on the increased AMT exemption, it appears that the AMT will capture a smaller number of taxpayers. Plus, additional changes contained in the new tax law will also move more taxpayers out of the AMT. The reason for that is centered around the changes to the itemized deductions highlighted in my previous post.

Who Must Pay the AMT?

People need only to be concerned with AMT if their adjusted gross income (AGI) is above the exemption amount, based on their filing status. If they make that income or above, that is the alternative minimum taxable income (AMTI). They will likely need to calculate the AMTI and pay the higher tax bill. This can be done on IRS form 6251.

A Change in the Way Inflation is Calculated for AMT

An often-overlooked part of the tax reform bill deals with the way inflation will now be calculated for AMT purposes. Under the old law, inflation was measured by the Consumer Price Index for Urban Consumers (CPI-U), a method that tracked the rise in costs of goods & services for typical U.S. households.

The new law uses the Chained CPI benchmark, which assumes that if a set of particular goods or services gets too expensive, consumers will trade down to a cheaper alternative. The effect of the Chained CPI is that it will rise more slowly than the old CPI-U calculations. Therefore, tax bracket thresholds will rise more slowly, as will other IRS inflation-sensitive numbers, such as eligibility limits for certain deductions and other tax credits.

The Bottom Line for High-Net-Worth Individuals

The AMT is most likely to impact affluent married Americans with children because they often have higher incomes (especially if both parents are working).  It is important to note that the AMT does not have additional exemptions for additional household members (children). In addition, there is no “marriage penalty” under the new AMT – which typically kicks in when two individuals with disparate incomes marry.

Please refer to your advisors for specific advice.

Robert Hughes, EA, is Principal-in-Charge of the Florida Office at Marks Paneth LLP and Past Principal-in-Charge of the firm’s High-Net-Worth Practice. He has served as a trusted tax and business advisor to the Marks Paneth’s high-net-worth clients for more than 20 years. He specializes in handling state, local and federal tax filings for high-net-worth individuals, estates, trusts and private foundations. Mr. Hughes began his career with the IRS, progressing from an entry-level position in the... READ MORE +

Ready to Restart: Considerations for Reopening Your Business 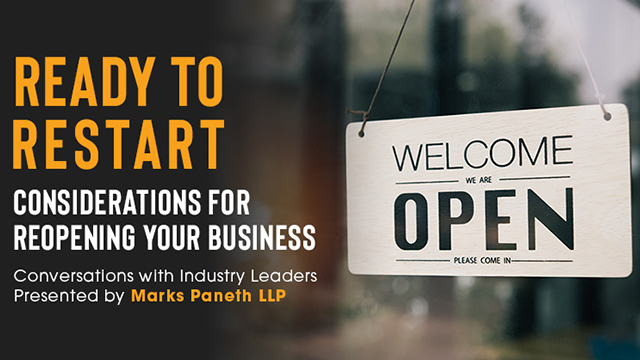