House and Senate Tax Reform Bills: Where are we now?

After the highly publicized release of the Trump administration’s tax proposals this past summer and the more recent GOP tax framework, both chambers of Congress are actively working on separate versions of tax reform legislation. On Thursday, November 9, the House Ways and Means Committee completed its markup and approved the Tax Cuts and Jobs Act. A vote on this House version of tax reform legislation is expected on the floor of the House of Representatives early this week. Also on Thursday, the Senate Finance Committee released a separate version of The Tax Cuts and Jobs Act that contains many alternative tax reform measures. The impact of each respective tax reform provision requires an analysis of priorities including one’s industry and income bracket.

Both the House and Senate tax reform measures maintain a revenue cost of approximately $1.5 trillion over a period of 10 years. This budgetary constraint not only raises deficit concerns, but will present challenges regarding the survival of certain tax provisions, especially during conference negotiations. Regardless, many provisions in both measures were anticipated since they were proposed earlier in the year either in the Trump Administration budget proposals, the GOP Tax Framework or as previously introduced legislation. Most of these tax provisions were expected and include rate reductions for individuals and businesses, estate tax changes, alternative minimum tax repeal, a territorial tax regime, and significant changes to long-standing tax incentives. The provisions described below are not inclusive of all the proposals currently being considered. Rather, they are highlights of the pending broad-based tax proposals and certain other provisions that may impact industries and clients served by Marks Paneth LLP.

Below are charts illustrating the application of the new brackets and rates for single filers and for those married filing jointly. Taxpayers who are married filing separately or claim head of household status will be subject to the same respective tax rates with modified taxable income thresholds. 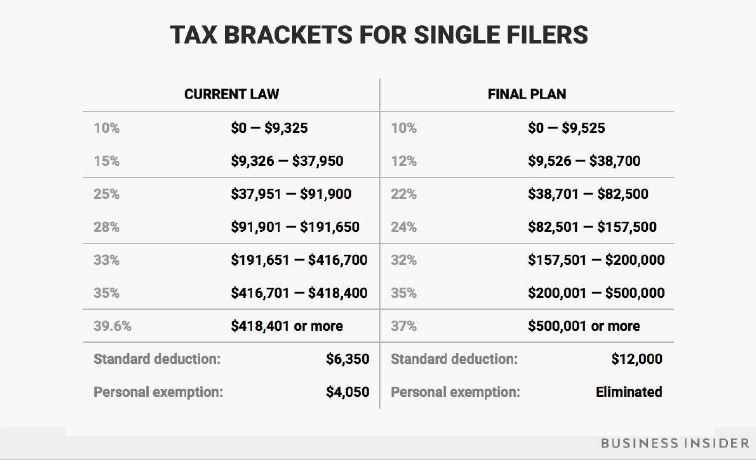 Exclusion of gain on sale of residence. Current law provides an exclusion from gross income up to $500,000 from the gain on the sale of a primary residence used as a primary residence for two of the past five years. Under the House version, a taxpayer will now have to own and use a home as a principal residence for five out of the previous eight years to qualify for the exclusion. In addition, the exclusion is phased out if a taxpayer’s adjusted gross income is above $250,000 ($500,000 for joint filers). The Senate version incorporates similar changes, but there are exceptions in the case of employment changes, health reasons or for unforeseen circumstances. The Senate also provides that the exclusion can only be used once every five years.

Other expenses. Both the House and Senate versions contain several provisions repealing previously deductible expenses. These expenses include, but are not limited to, personal casualty losses, tax preparation fees, moving expenses, membership dues, lobbying expenses and unreimbursed business expenses. In the Senate version, medical expenses are retained.  The Senate also repeals all miscellaneous itemized deductions subject to the 2% floor.

Alimony payments. In the House version, alimony payments are no longer deductible and such payments will not be treated as taxable income to the recipient. The provision is effective for payments based on divorce or separation instruments executed or modified after December 31, 2017. The Senate version retains the current law on alimony tax provisions.

Pass-through income taxes. In the House legislation, the maximum pass-through rate for businesses is lowered from 39.9% to 25% with special rules limiting individuals from transforming wage income into business income. Business owners have the option either to categorize 70% of their income as wages subject to ordinary rates and 30% as business income taxable at the new 25% rate, or to allocate wage and business income based on a capital investment formula. The bill clarifies that owners or shareholders receiving distributions from passive business activities would be able to treat 100% of this income as business income. Certain professional service businesses would not qualify for the 70/30 safe harbor treatment such as law, medicine and accounting. The House version also would impose a phased-in 9% rate on certain taxable income thresholds of active owners or shareholders of pass-through businesses.

Corporate interest deduction. Under current law, the deduction for net interest expense is unlimited. In both the House and Senate versions, corporate interest deductions are limited to 30% of a business’s adjusted taxable income. The Senate version clarifies that this 30% limit applies at the taxpayer level (or at the consolidated return filing level), and any deductions not allowed may be carried forward indefinitely. Both versions contain a small business exception to the proposed interest limitation provisions. Under the House version, businesses with average annual gross receipts of $25 million or less would be exempt, while in the Senate version the gross receipts threshold is $15 million.

Net operating loss deduction. In both the House and the Senate versions, the carryback operation loss is eliminated except with respect to certain losses for small businesses and farms. The carryforward is indefinite for all businesses, limited to 90% of taxable income.

Bonus depreciation. Both the House and Senate versions allow for immediate expensing of certain assets for the next five years. The proposals extend and modify the additional first-year depreciation deduction through 2022. The percent allowance is increased to 100 percent for property placed in service after September 27, 2017, and before January 1, 2023.

Depreciation deductions. In the Senate version, the recovery period for nonresidential real and residential rental property is reduced to 25 years. Separate definitions, along with the 20-year ADS recovery period, for qualified leasehold property, qualified restaurant, and retail improvement property have been eliminated.

Section 179. In the House version, immediate expensing is permitted for qualified property placed in service after September 27, 2017 and before January 1, 2023. It would also increase the 179-expensing limitation to $5 million and the phase-out amount to $20 million for the next five taxable years. Conversely, the Senate plan proposes to increase the limitation to $1 million with a phase-out threshold amount of $2.5 million.

Miscellaneous deductions and credits. In both the House and Senate legislation, several tax incentives have been either fully repealed or limited. These include, but are not limited to, entertainment expenses, transportation fringe benefits, section 199 domestic production activities, the rehabilitation credit, employer-provided child care credit, work opportunity credit (House version only), unused business credits and a credit for clinical testing of certain drugs. The research and development credit and low income housing credits have been specifically preserved.

Tax Accounting. In both the House and Senate, the current $5 million average gross receipts threshold for corporations and partnerships with corporate partners to use the cash method of accounting has been increased. The House version increases this threshold to $25 million while the Senate increases the threshold to $15 million. Unlike the House provision that repeals a prior year requirement, the Senate requires businesses to meet the threshold for three prior taxable years. Both versions also expand the requirements to account for inventories as materials and supplies that are not incidental. The House version raises the average gross receipts threshold from $10 million to $25 million while the Senate exempts taxpayers that meet the $15 million gross receipts test.

Intellectual property. Under the House version only, gain or loss from self-created patents, inventions, designs or formulas are treated as ordinary in character. The House also repeals the election to treat musical compositions and copyrights in musical works as a capital asset, and repeals the special rule treating the transfer of a patent prior to commercial exploitation as long-term capital gain.

Partnership tax changes. Both the House and Senate legislation contain partnership tax provisions. The Senate changes include an expansion of the definition of a substantial built-in loss when adjusting the basis of a transfer of a partnership interest, basis limitations impacting the deductibility of partner losses, and a clarification in order to measure gain or loss on the sale of a partnership interest that is effectively connected with a U.S. trade or business. In the House, there is a repeal of the technical termination rule and an important provision regarding carried interest. Transfers after 2017 of applicable partnership interests held for less than three years will be treated as short-term capital gain.

The House version repeals the federal estate tax and the generation-skipping transfer (GST) tax beginning after 2024. There is no similar repeal in the Senate. However, both the House and the Senate proposals double the estate and gift tax exclusion and GST exemption amounts. They would increase the federal estate and gift tax unified credit exclusion to $10 million effective for decedents who die and gifts made after 2017, and increase the federal GST exemption amount to $10 million. The House version retains the stepped up basis at death rules and lowers the federal gift tax rate from 40% to 35% effective for gifts made after 2024.

100% Dividend received deduction. In an effort to switch to a territorial tax system, the tax proposals provide for a deduction when foreign earnings are repatriated to the U.S. Both versions establish a participation exemption system for 10% or more of U.S. corporate shareholders of foreign corporations. The exemption would exempt 100% of foreign dividends from tax and modify other provisions of the code to reflect the economics of the exemption, including changes to investment in U.S. property, branch loss recapture, and limitation on losses from the sale of foreign companies.

Under the House version, a reduced tax (14% on cash and equivalents and 7% on amounts invested in the company) will be imposed on post 1986 profits that have not been repatriated to the U.S. and collected over a period of eight years. The Senate version stipulates 10% and 5% respectively, which the taxpayer may elect to pay over an eight-year period. The Senate also includes a recapture rule imposing a 35% tax rate when a U.S. shareholder becomes an expatriated entity within 10 years of the bill’s enactment.

U.S. tax base erosion prevention. Under the House bill, a 20% excise tax will be assessed on certain payments made by domestic corporations to related foreign corporations that are part of an international financial reporting group. Payments (other than interest) that are deductible, includible in cost of goods sold, or includible in the basis of depreciable or amortizable property are subject to the 20% tax on a gross basis. Alternatively, the related foreign corporation can elect to treat the payments as effectively connected income and pay full U.S. corporate tax on the net profits from the payments. Exceptions apply for intercompany services, which are charged at cost, and certain commodity transactions. The House bill also permits a credit for 80% of foreign taxes paid or accrued.

The Senate plan will limit the deductibility of interest for global groups, revise the definition of intangible property, deny deductions for certain amounts paid or accrued in hybrid transactions or with hybrid entities, repeal the domestic international sales corporations (DISC) provisions, and impose a tax on base erosion payments paid or accrued by a taxpayer to a foreign-related person.

The above-referenced proposals are expected to move quickly through both chambers of Congress. Since many of the proposals are controversial and others may impact the $1.5 trillion budgetary limitation, further changes are anticipated. Once conferees are selected and begin work on a final tax reform package, more will be known regarding the substance, timing and potential enactment of this important reform legislation. Marks Paneth will continue to monitor developments and provide our clients with detailed information on the scope and impact of all proposals.

Mark Baran, JD LL.M., is a Principal in the Tax Department at Marks Paneth LLP. He has more than 25 years of specialized tax, transactional and legal experience advising publicly-traded and private companies, regulated financial institutions, investors, high net worth individuals, and government agencies. Mr. Baran provides specialized tax consulting and transactional services to a broad spectrum of clients and industries including the public sector. He routinely provides tax opinions on the tax implications of... READ MORE +