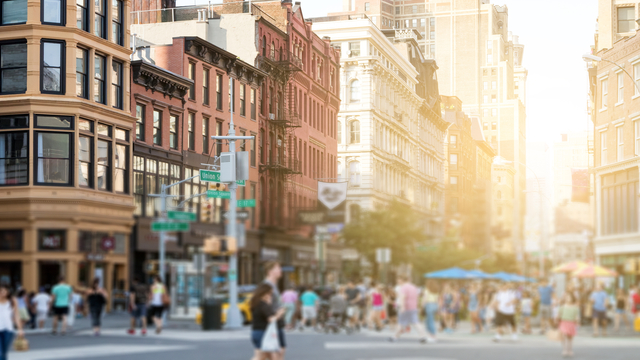 NYC real estate made plenty of headlines last year– and the rapidly shifting market trends show no sign of slowing down in 2019. For example, conditions in Manhattan such as the retail storefront struggle continue to pose uncertainty, while the preferences of an increasingly millennial workforce remain a driving force behind new office design and leasing trends.

Manhattan isn’t the only borough that has experienced a shakeup – at the end of 2018, Amazon announced its plan to build a new headquarters in Long Island City,[1] only to reverse their decision in early 2019. Also sharing the spotlight at the start of the new year was NYC Governor Andrew M. Cuomo’s announcement that the L train shutdown, which had loomed over Brooklyn retailers, landlords and residents for two years, was no longer happening as described. [2]

The effects of these issues will no doubt be felt for the foreseeable future – and here’s what we may expect from these developments in the months to come.

I first wrote about co-working office space company WeWork in 2017, when all signs indicated that the co-working model was poised for rapid growth. In 2018, WeWork received $3 billion in funding, bringing the company’s total valuation to $42 billion[3] and cementing the future of co-working, which has found great success among both startups and established companies. Owners of larger, traditional office spaces with low occupancy should consider adapting to the co-working model as a way to increase revenue and attract new tenants. While modifications may be necessary upfront in order to create the flexible, open spaces that drive collaboration, in the long run, this type of design offers cost-saving benefits reflected on monthly and yearly energy bills.

Owners should be aware, however, that the co-working model has altered the landscape of office space leasing and is driving short-term leases into demand. It is possible, though, that forming relationships with young companies now via short-term leases will translate into long-term agreements as the companies mature and grow.

According to Cushman & Wakefield’s 2018 Main Streets Across the World report, New York’s Upper 5th Avenue is no longer the most expensive retail street in the world.[4] (It has been replaced by Hong Kong’s Causeway Bay.) Rent is high, and as a result, there is no shortage of retail vacancies – especially in the most expensive areas of the city. The rate at which commercial rent has increased far outpaces retail product sales, leaving many property owners left to deal with storefronts that stay vacant for months as retailers struggle to adjust. But those who are willing to get creative may see some opportunity in the short-term, as online retailers are now frequently hosting pop-up stores and events and need venues in which to do so. And, interestingly, as some ecommerce-first brands continue to grow, they are experimenting with adding brick and mortar locations as a secondary way to serve consumers.

The good news for commercial property owners in New York City is that some things just can’t be purchased online – such as a stiff drink, a good haircut or a fancy dinner. The number of food and beverage establishments continues to rise, as does the abundance of service businesses such as hair and nail salons within the city.

While it used to be that only Manhattan real estate was considered a good investment, in recent years, the exodus of millennials and young couples with children to Brooklyn spurred tons of investment into the hip, trendy borough, and namely to Williamsburg. Then came a devastating blow: in July 2016, the MTA announced that in order to repair damage incurred during Hurricane Sandy in 2012, the 14th Street Tunnel (which connects the boroughs of Brooklyn and Manhattan by way of the L train) would shut down for 18 months.[5] This announcement incited fear and urgency among residents of Williamsburg and nearby Bushwick, two of the areas most affected by the shutdown, as they struggled to make sense of what their transportation options would look like during that time. Though the original 18-month plan was condensed to 15 months, it wasn’t much better. Many residents moved out of the area, and some went so far as to sell their homes. In those neighborhoods served by the L train, rents dropped and landlords began offering specials such as free months or reduced rents to entice tenants. Businesses braced for a decline in sales as the steady stream of people from Manhattan to Brooklyn was bound to slow down. But then, on January 3, 2019, Gov. Cuomo shocked the city with an announcement: the L train would no longer be fully shut down, leaving many to wonder what exactly would happen in the future.

The city’s new L train plans - announced just this week - may cause enough headaches to keep residents and commercial tenants hesitant to consider certain parts of Brooklyn.[6] But neighborhoods in downtown Brooklyn, like Boerum Hill and Fort Greene (which don’t rely on the L train) have experienced a recent boom in commercial and residential development, ensuring that the borough will continue to thrive. And lately, a new location has commanded the attention of the national media, along with investors, property owners, businesses and potential tenants alike: Queens.

ALL EYES ON QUEENS

In 2018, Jeff Bezos had city mayors across the U.S. holding their breath during the location selection process for Amazon’s new headquarters, and when the final decision was announced last November, Long Island City, Queens was the victor. Amazon’s pledge to bring 25,000 employees to the area was supposed tobring new opportunities for residential housing, buoy retail and commercial development and spur infrastructure improvement – but for New Yorkers already fed up with the crowded subways, struggling sewer systems and rising costs of living in Queens, the deal (which included public subsidies of roughly $3 million) was nothing more than corporate greed at work. Quickly mounted opposition to Amazon’s plan gained so much strength that at the time of writing this article, just three months after the initial decision was made, the tech giant has announced that they will no longer move forward with the Long Island City headquarters as planned.[7]

What does this mean for the borough of Queens? For now, it looks like the area will blossom with or without Amazon’s help. All of the recent attention on Queens’s winning features hasn’t gone unnoticed by other major corporations. Beauty manufacturer Estée Lauder just increased its footprint in Long Island City by an additional 100,000 square feet,[8] a sign that the area is still ripe for growth.

Big changes have overhauled the New York City real estate market recently. Landlords and property owners may find they have to adapt to changing trends in order to survive, or may have their luck decided for them by something as simple as which borough they are in. Even as some sectors struggle, new opportunities develop, and those that can capitalize early on these shifts in the market will stay ahead of their competitors as we continue to monitor these trends this year.