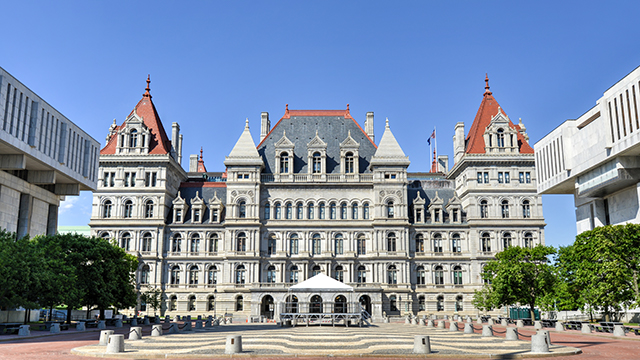 On January 19, 2021, Governor Andrew Cuomo outlined the Fiscal Year (FY) 2022 Executive Budget in the wake of the ongoing COVID-19 pandemic. The timing and amount of federal aid will determine the level of tax increases that will be enacted by the state in FY 2022. If Congress fails to provide at least $15 billion in funding, the New York State Executive Budget proposes several significant tax law changes, as follows.

Increase in Tax Rates on Highest Earners:  The current top PIT rate is 8.82% (not including additional taxes on New York City and Yonkers residents) on incomes of married taxpayers with a taxable income above $2,155,350. The budget proposal calls for “temporary” surcharge rates of 0.5%, 1%, 1.5% and 2% on taxable income above $5 million effective for tax years 2021 through 2023.  The top rate of 10.82% would apply to taxable income in excess of $100 million.

Voluntary Pre-Payment Deduction:  Taxpayers may voluntarily prepay tax year 2022 and tax year 2023 surcharge liability through their tax year 2021 estimated tax payments. If they take this option, they will receive a repayment via tax deductions in tax years 2024 and 2025.

We expect this item to be passed in February/March 2021, as the state budget needs to be passed no later than March 31, and to go into effect by the time taxpayers are ready to pay their 1st quarter 2021 estimated taxes in April. We also expect guidance in the near future on the mechanism of computing this additional tax liability and the payment options available to taxpayers.

Delayed Middle-Class PIT Reduction Phase-In: In 2016, the Middle-Income Tax Cut established permanent tax rate reductions for taxpayers with a taxable income between $26,000 and $300,000.

The budget pauses the phase-in for 2021, with 2020 rates remaining in effect for an additional year and the cut fully phasing in by 2026, rather than the original full phase-in set for 2025.

SALT Limitation Workaround:  The proposed budget calls for a new, elective 6.85% entity-level tax on partnerships and S Corporations doing business in New York, similar to Connecticut’s Passthrough Entity Tax and New Jersey’s Pass-Through Business Alternative Income Tax (PTE).  Tiered partnerships and partnerships with corporate owners would be ineligible to elect in to the tax.  If enacted, the tax would apply for tax years beginning on and after January 1, 2022.  In return for paying an entity-level income tax, individual owners would receive a credit against their New York State tax for some or all of their share of the tax paid by the entity.

While it seems somewhat likely that the federal SALT limitation will be repealed or at least raised later this year, electing in to an entity-level PTE tax may still be advantageous as it results in an above-the-line deduction and is not an alternative minimum tax (AMT) preference item.

Mandatory S Corporation Treatment Under New York Law: One other potential tax law change in the budget is a requirement for all federal S corporations to be treated as such for state tax purposes. Currently, only federal S corporations with investment income above 50% of federal gross income are required to be treated as New York State S corporations. This change addresses perceived tax avoidance in cases where shareholders change their residence to avoid tax on dividends paid by entities which are S Corporations for federal purposes, but which did not elect in to S status for New York purposes.

Other Revenue Actions: Other new tax actions include the imposition of sales tax on short-term vacation rentals, such as Airbnb, the creation of a regulatory and tax structure for the adult use of cannabis, legalized sports betting and taxes on wagering transactions, and the creation of a new tax credit to support businesses in rehiring workers that were displaced by the COVID-19 pandemic.

Pandemic Recovery and Restart Program: Governor Cuomo’s proposal would utilize four tax credits to help highly impacted small businesses in the accommodation, arts and entertainment, restaurant, and musical and theatrical production industries.  The program would establish three new tax credits and increase a fourth one to help businesses in those industries:

We will continue to monitor the proposed budget submitted by Governor Cuomo, which is expected to pass no later than March 31, 2021. How much federal aid New York receives will ultimately determine if some of the changes outlined above would be necessary.

Reshma Ghouri, CPA, is a Director in the High-Net-Worth Group at Marks Paneth LLP. She has nearly 20 years of experience in public accounting – specializing in income tax planning and consulting services for high-net-worth individuals, multi-state income tax, expatriate taxation and private foundations. She also has experience serving the real estate industry. Ms. Ghouri is a member of the New York State Society of Certified Public Accountants and the American Institute of Certified Public... READ MORE +