What Is the New York Real Estate ‘State of the Market’? Vibrant & Entrepreneurial 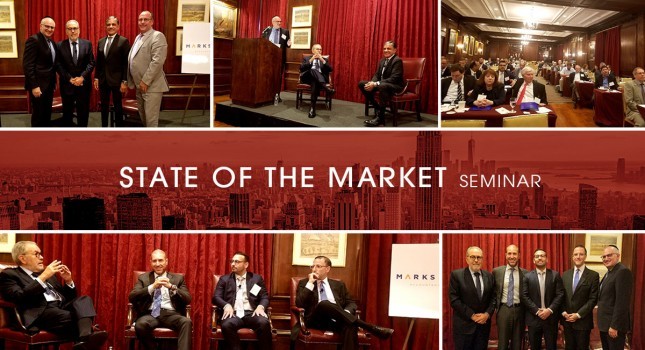 Marks Paneth’s inaugural New York Real Estate State of the Market Seminar took place this September in front of an energetic crowd at the Harvard Club in Manhattan. We were joined by industry leaders from many of the city’s premier real estate development firms and professionals from the financial and investment communities, all of whom were looking forward to listening and learning from some of the brightest achievers and strongest advocates of New York real estate.

The half-day signature event, presented by our Real Estate Group, began with a fireside chat between Joseph Moinian, CEO and Founder of The Moinian Group, and Michael Stoler, President and CEO of New York Real Estate TV. Joseph Moinian’s career has been remarkably successful, and much of it based on his sense of market timing along with the courage to take calculated risks. Moinian founded his firm in 1982, and it has grown to be one of the nation’s largest privately held real estate firms, with a portfolio of real estate assets valued at more than $10 billion and comprising more than 20 million square feet of property.

Michael Stoler, the well-known host of “The Stoler Report: New York’s Business Report,” conducted a wide-ranging interview with Moinian that centered mainly around Moinian’s deal-making expertise. Moinian began by addressing the upheaval in the New York real estate market caused by the recent change in the New York State Rent Regulation law. “Be patient,” he counseled the audience. “Things might get worse under the new controls, but New York real estate is always resilient and savvy investors and owners can wait out the disruption.”

Moinian and Stoler then proceeded to take on a variety of topics that revolved around where Moinian sees investment and development opportunities, including:

• The popularity and availability of co-living arrangements. Moinian commented that co-living “reflected the needs and the dynamics of the market,” and this was yet another example of how real estate in New York evolves. He observed that younger New York professionals have little or no need to own cars and have now decided to avoid other longer-term ownership burdens by opting out of mortgages. The goal of home ownership has lost some of its appeal and, according to Moinian, “the mentality of the young is to rent.”

• The boroughs - He was bullish on Brooklyn and Queens largely due to the size of the market and the many options available to renters – especially those that offer amenities, which are now such a normal part of the competitive landscape. He sees good opportunities in Upper Manhattan and the Bronx (including in Opportunity Zones) within “decent walking distance to an MTA station and good schools.”

• Retail industry conditions - The decline of retail in New York City (reflected by the reduction in chain store locations) signals to Moinian that retail property is overpriced. He sees the flip side though: “Now is a good time to own well-priced retail space and be willing to wait and watch as the value adjusts upward.” Unfortunately, he felt that there might be an inclination to set excessively high retail rents to drive out retail and allow for redevelopment at higher prices and margins.

1)     On-location, or nearby, health care-related services such as gyms, doctors’ offices or clinics.

Moinian ended the chat with some strategic insight into his real estate investment priorities. He is actively working within Opportunity Zones, having raised $1.5 billion from investors in developments across New York, New Jersey, South Florida and California, and remarked how “capital gains put into Opportunity Zones is the best use of funds for tax-savvy investors.”

influencers: Joseph Farkas, CEO and Founder of Metropolitan Realty Associates; Matthew Iacopetta, Vice President of The Richman Group; and Seth Pinksy, most recently Executive Vice President and Fund Manager at RXR Realty, and now the newly announced Chief Executive of the 92nd Street Y. It was a true tour of the New York real estate horizon - from public-private partnerships, to tax credit pricing, to the politics of prevailing wages, to industrial conversions, to hospitality, and the fluidity in the retail market; and then onward to the outer boroughs, and finally to the suburbs.

The long-term focus for Farkas was to look for development density, and his advice to value investors was to “repackage, reuse and develop from the ground up.” For Iacopetta, the focus was on opportunities for the fixed-income population and on syndication deals. Pinsky’s focus was on the outer boroughs and suburbs as well as on public-private partnerships. Some specific ideas they cited:

• Grand Central Terminal. The enormous transportation improvements underway and nearing completion (including LIRR trains into GCT as early as 2021) mean a revitalization of Midtown East from 42nd Street to 50th Street and from Madison to Lexington Avenues. One sure result: East Side occupancy, both residential and commercial, will go up.

• More on Midtown East. The Grand Hyatt is, under that shiny exterior, really just the old Commodore Hotel. This is a tear-down deal that will result in significant new higher-density building coinciding with transportation improvements (especially easing pedestrian flow from track level to the street) being offered to the MTA by developers.

• Opportunity Zones around 125th Street and other areas of New York that offer good access to transportation and other attractions – though the lengthy 10-year tie-up of capital that is required is still a hurdle for investors.

• Big box store demise. Shuttering stores and redeveloping them into multi-purpose properties with reasonable rents allow them to become destinations and hubs for smaller retail and entertainment ventures.

• Industrial conversions into new residential and retail developments are on the rise. Long Island City is a prime example, with an entirely new skyline rising along the East River.

• Industrial space itself is still needed (and available), but it needs to be zoned correctly, and permits to tear down older unsuitable industrial buildings need to be easier to acquire.

• Politics as an area of concern. Two examples:  The prevailing wage controversy is becoming intractable; and the delay or prohibition of critically needed new infrastructure projects, like gas mains, has reached crisis stage. Few in the public are aware of the emergency and fewer in government are doing anything about it.

There was much more, and the scope of the conversation was truly a reflection of the vibrancy and entrepreneurial spirit that infuses the entire real estate industry in New York. Marks Paneth will continue to keep its finger on the pulse of this extraordinary world of opportunity, and I encourage you to speak with your Marks Paneth advisor if you’d like more information on any of the issues raised in this article.