It is very common these days for not-for-profit (NFP) entities to sponsor affordable housing programs for the needs of the low-income community and the constituents the NFP serves. Among the various models of affordable housing programs available, the most common one is the Low-Income Housing Tax Credit (LIHTC) program, created by the Tax Credit Reform Act of 1986. The LIHTC program regulations are under Section 42 of the Internal Revenue Code. The program guarantees affordable rents that are lower than the market rates for similar housing units in the community, and comes with several long-term compliance requirements, restrictions on eligibility of the tenants and restrictions on the rent that can be charged to a tenant. The program also provides tax credits to the investor.

In a typical and simple LIHTC program initiated by an NFP, the parties involved include: the NFP organization (Sponsor); a housing subsidiary of the sponsor (a housing development fund company, or HDFC); a for-profit subsidiary of the HDFC (General Partner); an investor; an organization that facilitates the tax credit deal (syndicator) and an investment fund or an organization representing the tax credit investor (Limited Partner).  The general partner and limited partner create a for-profit limited partnership (LP) entity that develops the LIHTC “project.” Variations of this typical structure are also available in the marketplace. In some cases, there are multiple general partners and limited partners. A Limited Liability Company (LLC) model is sometimes used instead of an LP. Generally, the general partner corporation owns less than 1% of the LP and the limited partner corporation owns 99% of the LP, with more than 99% of the capital contribution coming from the limited partner and the remaining 1% coming from the general partner.  The capital contributions of the partners are as agreed upon by the partners and as specified in the partnership agreement. 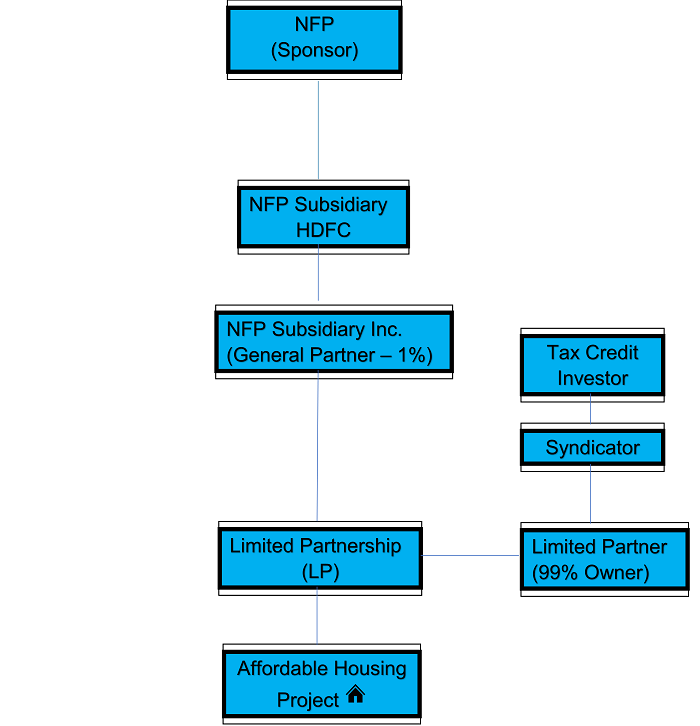 Since the NFP invested in the LP through its subsidiary, the LP is a related party to the NFP. When an NFP has a related party, either not-for-profit or for-profit, that related entity should be considered for the year-end financial reporting of the NFP. The legal form of that relationship would determine the appropriate reporting, such as consolidation, equity or fair value accounting along with the required disclosures. Whether the for-profit entity needs to be consolidated to the NFP depends on whether the NFP has a controlling financial interest in the related for-profit entity through direct or indirect ownership of a majority voting interest (more than 50% of the outstanding voting shares of the for-profit entity). If the NFP owns 50% or less of the voting interest in a for-profit entity, the equity method of accounting is followed, whereby the NFP recognizes the increases or decreases in its investment at the year end in that for-profit entity.

According to this guidance, it would appear that, in the LP arrangement discussed above, the NFP should follow the equity method of accounting to recognize the change in its investment at the yearend, since the NFP subsidiary general partner does not have a controlling interest. The Financial Accounting Standards Board’s (FASB) guidance on consolidation is included in Accounting Standards Codification (ASC) 958-810, which provides special guidance for the consolidation of LP arrangements discussed above. According to ASC 958-810-15, the general partner is presumed to control the LP and required to consolidate the LP on the NFP’s financial statements, unless the relationships fall under certain specific exemptions included in this ASC.

For many years, NFP executives, accountants and their auditors debated who controlled an LP and whether NFPs needed to consolidate their LP ownership interests, which resulted in conflicting views.  Finally, in 2005, FASB’s Emerging Issues Task Force (EITF) issued EITF 04-05 to address this issue. The EITF reached a consensus and established a presumption that the general partner in an LP controls that LP, regardless of the extent of the general partner’s ownership interest.

After the issuance of EITF 04-05, many NFP organizations that were general partners in LP LIHTC projects began to consolidate the financial statements of the LP with the NFP’s for external reporting purposes. Those who did not consolidate took the position that the limited partner had either the kick-out rights or substantive participating rights.  FASB replaced the Generally Accepted Accounting Principles (GAAP) with the release of the FASB Accounting Standards Codification (ASC) in 2009, and EITF 04-05 was included in ASC Subtopic 810-10. The NFP industry was, to a certain degree, settled on the consolidation issue of LP— until a new Accounting Standards Update (ASU) was issued by FASB in 2015.

In February 2015, FASB issued ASU No. 2015-02, Consolidation (Topic 810) Amendments to Consolidation Analysis. This ASU, among many other things, removed entity-specific consolidation guidance for LPs and accordingly eliminated the presumption established by Subtopic 810-10 that a general partner controls an LP and should consolidate an LP. In addition, under the ASU 2015-02 guidance, the LP needed to determine whether it was a Variable Interest Entity (VIE) or a Voting Interest Entity (VOE). To qualify as a VOE, there was an additional requirement that an LP must provide the limited partner with either substantive kick-out rights or substantive participating rights over the general partner.

For an LP that qualified as a VIE, a limited partner with a controlling financial interest should consolidate the LP. (A controlling financial interest may be achieved through holding a limited partner interest that provides substantive kick-out rights.) After the adoption of ASU 2015-02, NFPs applied the general consolidation guidance included in ASC Subtopic 810. However, the revised guidance did not address when a general partner would have to consolidate an LP; rather, it addressed when a limited partner would have to consolidate an LP. Many NFP organizations that were consolidated under the “presumption of control” concept have either deconsolidated or contemplated deconsolidation of the LP. A lot of confusion and uncertainty also arose since NFP organizations are not within the scope of the VIE model. As a result, under ASU 2015-02, it remained unclear when an NFP organization must consolidate the general partner’s interest in a for-profit LP.

In January 2017, FASB issued ASU No. 2017-02, Not-for-Profit Entities—Consolidation, clarifying when an NFP that is a general partner or a limited partner should consolidate a for-profit LP or similar entity. This ASU, which is an amendment to the existing consolidation guidance included in FASB ASC 958-810, is effective for years beginning after December 15, 2016. A similar entity is an entity, such as an LLC, that has governing provisions equivalent to those of an LP (for example: managing member = general partner and non-managing member = limited partner.)

Under the guidance issued by this ASU, FASB reinstated the consolidation guidance for NFP general partners of for-profit LPs as it existed before the issuance of ASU 2015-2. Accordingly, an NFP that is a limited partner of a for-profit LP or similar entity will continue to presume that it controls the LP, regardless of the extent of the general partner’s ownership interest, unless that presumption can be overcome— which it would be if the limited partner has substantive kick-out rights or substantive participating rights. ASU 2017-02 was issued to fix the confusion and uncertainty created by ASU 2015-02, among other things.

a)       The kick-out rights can be exercised by a single limited partner or through a vote of a simple majority, when there are multiple limited partners, or a lower percentage of the limited partners’ voting interests held by parties other than the general partner(s) and related parties.

b)      The limited partner(s) holding the kick-out rights must have the ability to exercise them—or in other words, there should not be significant barriers that would preclude the exercising of the rights. Some examples of such barriers are: financial penalties associated with the exercise of the kick-out rights, inadequate number of qualified general partners to replace the exiting general partner(s), conditions in the partnership agreement that makes it unlikely that the rights can be exercised, lack of required information and mechanism to call for and conduct a vote, etc.

The partnership agreement may provide a unilateral right to the limited partner to withdraw from the LP whole or in part that does not require dissolution or liquidation of the LP. This right is often referred to as a withdrawal right and not deemed to be a kick-out right.

a)       Selecting, terminating and setting the compensation of management responsible for implementing the LP’s policies and procedures (example: limited partner can unilaterally appoint or terminate the managing agent for the  project)

b)      Establishing operating and capital decisions of the LP including budgets in the ordinary course of business.

A thorough review of the LP agreement is necessary to determine whether the participating rights available to the limited partner are substantive. If the agreement includes matters that are solely decided by the general partner, that need not be investigated.

There could be situations where the limited partner has a participation right that can be typically considered substantive, but the general partner has a contractual right to buy out the interest of the limited partner (call option) at fair value or less. If there is a feasibility of exercising that contractual right, then the participation right is not substantive. It is also worthwhile to mention that participating rights do not require holders of such rights to have the ability to initiate actions.

c)       Liquidation of the LP initiated by the general partner

d)      A decision to enter the LP into bankruptcy or receivership

The LP agreement provides numerous rights to the limited partner. The facts and circumstances surrounding each right should be assessed to decide whether the right is a participating right or protective right. In general, a right of action on matters that are undertaken in the ordinary course of business tend to be participating rights. It is worthwhile to examine some of the examples included in the FASB materials below. A limited partner’s right to:

Although FASB ASU 2015-02 created some confusion and uncertainty about when an NFP that is a general partner in a for-profit LP should consolidate a for-profit LP or similar legal entity, the issuance of FASB ASU 2017-02 helped clarify the confusion and uncertainty and reinitiated the consolidation guidance that had been eliminated by 2015-02. The current standard is:

b)      In a scenario where the presumption is overcome through either the limited partner’s substantive kick-out rights or substantive participating rights, the NFP general partner would account for its investment in the LP using the equity method of accounting, unless the NFP makes an election for fair value reporting.

The biggest challenge for the NFP executives, accountants and auditors is to thoroughly review the LP agreements in order to conclude whether the limited partner has substantive kick-out rights or substantive participating rights.

This article originally appeared in the Jan/Feb 2019 issue of Taxation of Exempts Journal by Thompson Reuters.